Writer Ernest Hemingway famously ran with (and wrote about) the running of the bulls in Pamplona. If you’ve never heard of this, it’s an event that happens during the annual nine-day San Fermin festival in Pamplona, Spain. Bulls being used in the bullfight that evening are “run” by drovers through the streets and into pens inside the bullring.

At some point, many many years ago, locals decided to run along with the bulls and eventually they took up the more daring challenge of running in front of the bulls. This seemed like such a fun idea that tourists from all over the world decided to join them. 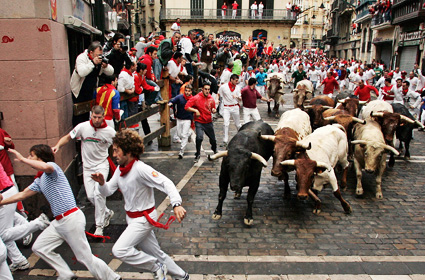 Running down a cobblestone street with hundreds of other drunk people trying to keep ahead of a pack of confused and irritated bulls – what’s not to like?

As well, it is somehow a test of one’s courage to risk a horn in the backside. Actually, there are many bovine athletes who have lost their lives in the odd endeavor, and not a few have lost their dignity. And of course there is that viral photo a few years back documenting the double victory of one steer and two rears (of brothers, no less). Chalk one up for the bulls.

That said, there is reportedly a sense of exhilaration and accomplishment that is associated with this unique event – and this I can appreciate, even if I don’t completely understand.

That’s because there is a more modern phenomenon which gives the same sort of high: running with the After-Thanksgiving shoppers.

And if Hemingway was alive, he would shudder at the mere thought of a stampede far more dangerous than one of simple, snorting, horned beasts. I’m convinced he would probably come up with some reason to excuse himself and head back to the card table with a double absinthe.

This is not for amateurs, folks

Black Friday remains the “biggest shopping day of the year” – an official moniker for the crazed stampede to every department store in America immediately following “the biggest gobbling day of the year.” Due to the visceral thrill of a tactile grab, Cyber Monday and online shopping have mitigated but not eliminated this firmly entrenched custom.

Terms like DOORBUSTERS and PRICE BLOWOUT and RACE TO SAVE proliferate TV and social media advertising in the days leading up to this event.

The other day my friend saw an ad which excitedly informed readers a certain store would open their doors on Friday at 4 a.m.

I could tell she didn’t get it.

You see, she is not a shopper. She is more of a “seek and destroy” type of customer, venturing out to buy something only when absolutely necessary. She’s busy and practical, and cannot imagine deliberately joining such frenzied bargain-hunting masses – the pushing, the shoving, the grabbing, the GREAT DEALS.

It’s a true test of courage – one which is neither meant for the faint of heart, nor easily understood by the uninitiated.

Indeed there are several similarities between the two stampedes:

And both involve a lot of bull.